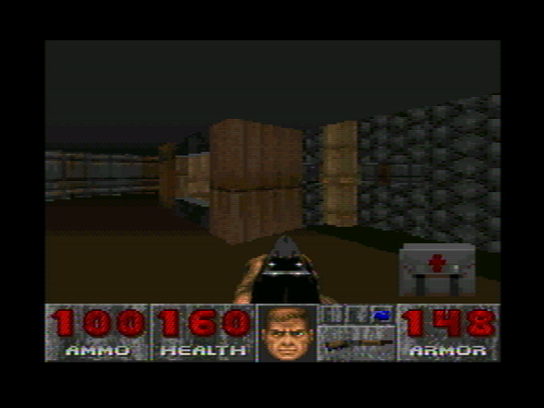 Visibility in SNES Doom. Image shamelessly copied from...somewhere on the internet.
It's been a long time!  I apologize for that.  As much fondness as I have toward the SNES version of Doom, I have to be in the right frame of mind to play it.  It is truly a unique experience.  Every single console Doom stands out from the others for myriad reasons, but SNES Doom stands alone in that it's the only port from the 90s (and even through 2001's GBA release) to feature accurate representations of the original Doom's level designs.  Yes, it lacks floor and ceiling textures.  I'm just glad it still has skies!  Yes, it only shows enemies from the front, and only one other port suffers from this ridiculousness--the 32X--but it has the invisibility powerup and an even better effect to go with it than the original PC version.

If my long-winded tirade hasn't made you retreat from here yet, you're probably still wondering what the point is of going back and playing old console versions of an old game that holds up perfectly well when played on a modern PC.  There are many, but a couple stand out as the most obvious.  The first would be to see if these versions are better.  But what are the odds of that, right?  They don't have the graphical abilities, storage capacity or processing power to improve upon a PC game.  Well, that brings us to the second reason: To see how different they are.

Even a Doomer who's got Doom, Doom II, Final Doom, Master Levels and a plethora of fan-made levels at their disposal can still desire something a little different now and then.  A new experience.  The console versions of Doom provide just that.  I've probably gone far enough out of my way in previous articles to emphasize that point, but I just don't feel that I can make it clear enough no matter how many ways I say it.

So I've finally battled my way through "The Shores of Hell" and I'm two levels deep into "Inferno".  It's time to share more of my experiences.

SNES Doom is blurry and it seems to have an odd form of distance shading which could really just be the system saving memory by not showing stuff that's too far away.  It's annoying in one sense, creepy in another.  I mean, I remember going through the maze portion of "Halls of the Damned" and not quite recalling where all the enemies were.  In some cases I'd hear Pinkies but not see them.  In others I'd get shot a couple times by Former Humans or Sergeants and look around and around until I could shoot back.  How close were they?  Were they around the corner, or still in line of sight?  Ouch!  Shot again!

The point is that a potential drawback to the game actually makes it fun and intense.

The enemies aren't ridiculously aggressive, either.  I know I said that they are, but I may have overstated it.  I mean, the Former Humans and Sergeants don't miss, and they'll knock you down a peg when they shoot at you, but no matter what you're surrounded by, generally only one enemy will attack at any given time.  In "Slough of Despair" I had a few Pinkies coming at me, and they basically took turns.  I backed away and then one ran in front of another to attack.  The second one just sort of remained idle behind him while I killed him.  "Idle" is a relative term, however, because some enemies that have been "activated", so to speak, in SNES Doom tend to have their legs rapidly moving at all times.

I'm getting ahead of myself, however, because my experience with the Cyberdemon is also significant.  I know the trick to "Tower of Babel" all too well.  This, by the way, is the original "Tower of Babel" as opposed to the console-exclusive version found on the Jaguar.  You have the rocket launcher out and ready because you're ready to fight the Cyberdemon, but when you get to the courtyard, you've got Lost Souls coming at you.  It sucks, because they rush in too close for you to survive the explosion if you shoot them with rockets.  At any rate, I dealt with every Lost Soul I could see and then faced the Cyberdemon.

We fought mostly at a great distance.  Didn't end up covering more than one side of the map.  I could barely make out where he was or when he was shooting at me through the entire battle, but I hit him enough times to win the match.  I couldn't even tell he had died and suddenly I was on a screen filled with text that explained to me that I had won.  It was, quite frankly, too easy.  This is Ultra Violence, mind you.  Yet all I had to do was stay out of sight after I fired a few rockets in his direction and stay far enough away that he was practically reduced to an idle mode.  He really doesn't chase you around too much, if at all, from what I could tell.

I faced tougher coalitions of Barons and Cacodemons on the Jag.  But hey, I was kind of nervous going in, so in a way I'm glad it was easy.

The accuracy of the maps is nice.  I like the edited maps in other versions, too, but I don't want too much similarity between versions.  The less the better, I say!  With that in mind, I was so not ready for the original "Halls of the Damned".  A whole portion that's missing in other versions is still there.  When you go for the yellow key on the Jag, it's a lot simpler.  The octagonal hub doesn't have a bunch of corridors branching off from it.  Instead, the key is at the center of the hub--when you grab it, doors open and enemies come at you from all sides (except the way you came in).  The SNES version, on the other hand...

...well, let's just say I got into a few more fights than I wanted to.  And I totally fell for the fake exit.  You know what, though?  That fake exit is cool.  I'm glad it's in there.  I remember it from years ago.  It was nice to see it again.

I will continue to battle my way through Inferno and return when I have more to report, and then I'll be ready to move on to the Playstation version.

As a final note to those who don't like the SNES soundtrack--it is indeed one of the best for Doom on a console.  I've already talked about it.  The way it uses sample-based music and really rocks out...but detractors in a few forums have decried the guitar sound by suggesting that it sounds like violins.  Okay.  So what?  It sounds good.

That's my two cents for this update.  Stay tuned!  Here's an updated timeline: